Home ▸ Food and Drink ▸ Different types of salsa for your nachos 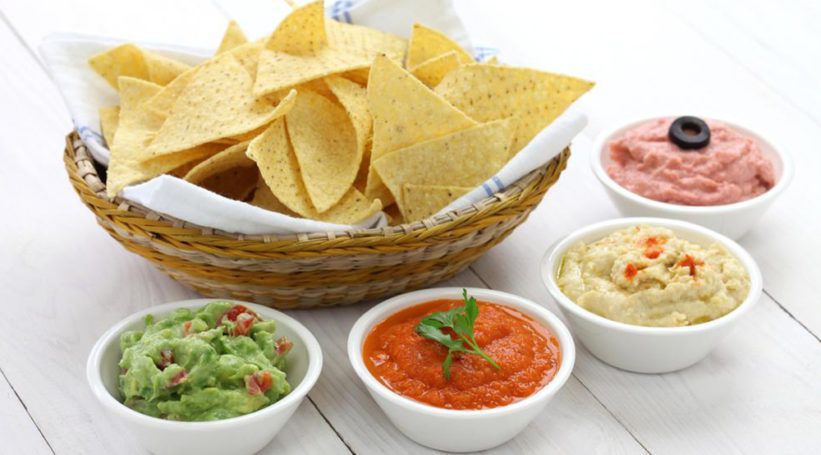 Different types of salsa for your nachos

Traditionally served with melted cheese, jalapeÃ±os peppers. Nachos are fried tortilla chips which can be served with a variety of ingredients as the topping. Common toppings include black beans, cilantro, meat, guacamole, lettuce, spinach, lime, olives, onions, garlic, pickle and many more.

Here is a list of the different types of salsa and toppings that can be served with the classic nachos.

Chipotle salsa which features a variety of ingredients like roasted tomatoes, cherry tomatoes, garlic, onion, lime and many more which can be blended and chilled to be served with the fried tortilla chips later. Easy to prepare and the topping goes well with your nachos.

Watermelon salsa which of course features the main ingredient watermelon, some cucumber, green, yellow and red peppers, all diced to be combined with lime juice and sea salt to be tossed up and served with cheese coated nachos.

Another variant is the bacon corn salsa which gives it that fatty, salty, smoky flavor of the bacon along with creamy corn. Traditionally not considered as a salsa side since it lacks the main ingredient tomatoes, but nevertheless an interesting take on the original served with cheesy creamy nachos.

Salsa Verde is a favorite amongst many others, which instead of tomatoes uses tomatillos which gives it that hot spicy flavor with the other condiments that go in a traditional salsa, to be served with deep fried nachos.

Avocados mixed with corn with a unique flavor and taste palate, not your original salsa but an interesting variation. Again, a dish which does not feature tomatoes but still maintains that acidic flavor through avocados with the creaminess of the corn kernels that complement cheesy nachos.

Mango papaya salsa, featuring the tropical fruit in all its glory. Mangoes, papaya, onions, cilantro, jalapeÃ±os all diced nicely to be combined with salt, peppers and a dash of fresh lime to make another variety without using tomatoes.

The use of corn is not uncommon in salsa variants, but using grilled corn takes its flavor to the next level. Featuring three of the original ingredients from tomatoes to onions to cilantro and the added char grilled corn to top the fried nachos.

The use of fruits in salsa is not unheard of, which is why our next variant features delicious juicy pineapples diced to be combined with the classic ingredients adding tropical sweetness to cut through all that acidity, another variant which doesn’t feature tomatoes.

Using black and white grapes in a salsa preparation is taking it to the next level, again a variant which does not feature the use of tomatoes but instead green onions, chilies, freshly chopped cilantro mixed with salt pepper and lime juice.

You can find out more interesting nacho and salsa recipes online which feature some of the best and not so common ingredients used in your preparation methods, to give that traditional classic an exciting twist.